The Apercalypse is coming (geddit?), thanks to all us coffee addicts…read on for my latest poem, inspired by research by Plymouth’s Marine Lab on the caffeination of our oceans.
Like this? Like me at www.facebook.com/mamatokus or follow me @MamaTokus 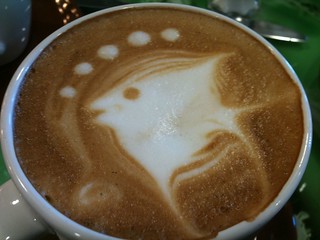 It’s the ’30s and prohibition is in full force.

Not everywhere of course.

Down at the Jumpin’ Bean (don’t be seen going in)

You can get whatever you want,

If you know what to ask for…

[HIM] “Hey fella. Get me a tall skinny soy latte choca-mocha

[HER] “Honey, what’s it take for a goil to get a drink around here?

Make mine a triple-shot machiatto with ALL the fluffy stuff.”

[HER] “I gots things I gotta do. Really quickly”

When the lawmakers banned the brown stuff.

Cut coffee from the country’s cups to treat a national addiction.

The stats made scary reading. They weren’t pulp fiction.

• Half all divorces cited unreasonable caffeinated behaviour, usually around mid-morning

• 1 in 2 people had coffee breath. The country was stinking!

Then there was the toll on the environment.

The PLP – Plastic lid problem – had spiralled out of control.

They blocked drains and waterways,

Blew across windscreens and runways.

The cost of treating a coffee addict was much less than incarceration.

But it wasn’t a vote-winner across the caffeine-withdrawn nation.

With sofas, a folk soundtrack and the unofficial slogan:

“If you’re gonna be behind bars, make ’em coffee bars”

The whole damn system of prohibition was coffee-stained, double-shot through with corruption.

Meanwhile the oceans were getting caffeinated.

Whales were wired. Sharks were getting tired

With the mid-afternoon caffeine ‘dip’

Bottom-feeders were getting headachey,

And the combined diuretic effect on us all

A caffeine apocalypse was probable.

Our only hope was from the future.

The Decaffeinator – an android sent from another time

To fell the first coffee tree,

Changing the world’s ecology in prehistory.

But his coders programmed his binary improperly

His caffeine-hunting circuits were faulty

And he ignored the threat to the world of…tea.