I’m back from performing at Shunt – this amazing underground artspace in London Bridge underground station. I was there performing poetry “when no-one listens”, which is a bit like writing a blog where nobody visits.

However, this week I’ve been told I have at least 2 followers – one of them certainly through a new bit of jiggery-webbery known as NetworkedBlogs, which links your Facebook account with your blog. Check out my Facebook fan, over there on the right. Find ’em on Facebook right here.

Which made me think I’d better pull up my digital armchair and commit to turning on Tokus TV a bit more often – giving you recommendations, experiences, ideas and directions from the 3rd Eye of Da Tokus (actually, I’ve got four, dontcha know?). 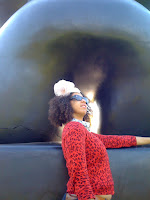 So here goes. Whilst in London I visited the Frieze Art Fair, where members of the arts fraternity hang out and look louche, whilst cutting multi-nought deals for inpenetrable contemporary art. Luckily, the shuttle-bus arrived outside in time to whisk me away to the Museum of Everything, an exhibition of outsider art. Go see.

I knew I was in the Age of the Marvellous when me and a mate watched a lecture by consciousness-miner Roy Ascott, (pictured right) at Plymouth University. He reckons artists are the ones equipped with enough imagination to explore the boundaries of physics and consciousness. Well it ain’t the accountants of the earth, now is it? Have a taster of Roy’s ideas here, courtesy of Google books

Finally, finished the week at the Plymouth Respect Festival, where I enjoyed the work of Baluji Shrivastav in bringing alive Hindu epic poem the Bhagavad Gita in a new work called Song Celestial with his sitar, and his band’s poetry, harmonies and beauty. Baluji’s also been cutting in in the pop world, performing at the BBC’s Electric Proms with The Doves.

Next week, New Orleans on a fact-finding mission. I’m blessed.

PS: Am still getting feedback about Mama Tokus at Tuk Tuk Cabaret.