I have been to the source and back in the last month.

N’Awlins – birthplace of jazz and blues – has me in its thrall.
Unfashionable as it sounds to say this but I like . And Americans (truth is I am one by birth, so I’m claiming some kinda genetic affinity. As proven by the way I said kinda just then).
Thanks to the Plymouth City Development Company and UK Trade and Industry, I went to to fact-find. 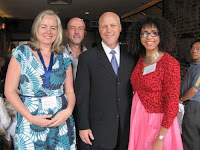 FACT #1: N’Awlins rolls like a purdy-mouthed piggy on a barbecue spit.

I was a delegate at the World Culture Economic Forum, an event created by one of ’s charismatic leaders: Lt Gov Mitch Landrieu (2nd right) – who decided that culture was gonna be at the centre of NOLA’s economy in the 21st century. Surprise to me that it wasn’t, what with its place assured at the birthplace of those American art-forms jazz and blues, y’all (there I go again). Came back with lo of notes for the Plymouth Culture Board, any road. 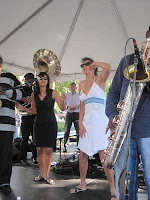 FACT #2 (see what I’m doing here with the American number punctuation?):
There is so much music, that people in NO take it for granted.
I saw the famed Dirty Dozen twice (joining them on stage – see left – and getting an autographed copy of their brand new version of Marvin Gaye’s What’s Going On) and the Rebirth Jazz and once in the same week. Had we not missed our flight, we would have caught Dr John and Jon Cleary too.

Plus we caught
Andre Williams (pictured above right)– a rockin’ 74-year-old who (according to a particularly memorable chorus) likes his woman: “Agile, mobile…and hostile!”
Amen!

FACT #3: There are lots of big people in NO.

And I was headed that way after feasting on the following:

During my time there, I managed to get on the radio – joining in Marc Stone’s afternoon show on community jazz and blues internet station WWOZ.org. Tune in over the interweb – you won’t find many adverts, just fantastic music delivered by loving experts, 24/7. Hear my interview online through Mama Tokus’s Myspace.

Plus we also visited the fantastic Ogden Museum of Southern Art, which curates music, film and food events alongside its exciting span of pieces.
So why did I come back?!