Here’s Mama performing at Cabaret Quixote within the Burning Man festival in Nevada in September this year.

Amazingly, the cabaret tent is put on by a bunch of Burners from….the UK! They build a castle (natch), put in a stage, full lighting and sound rig and even have a team of technicians – very pro.

The acts are many, varied and usually excellent and I was lucky enough to land the last slot on two nights in the dust of Black Rock City. Here’s my version of Eminem’s Slim Shady, backwards-engineered to be a feminist rant about body image: 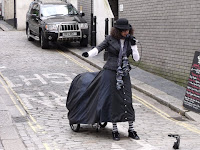 In other news, Mama’s been very busy dragging her sorry black ass around various Devon towns. I do a street show with a distended bustle on wheels that holds a PA system. Therefore, I call it my Public Dress System. Here’s what it looks like:

I’ve been performing in Ashburton, Dartmouth and Kingsbridge, and people seem to like it, but I think I need a lot more elegance. Hmm – stay tuned for mobile music-dress developments.

Mama’s been starring in the subversive seasonal show Yule Be Sorry! as part of the Tuk Tuk Cabaret Team. We’ve been playing every Sunday at the B-Bar and we’ll be doing so until and including December 19. 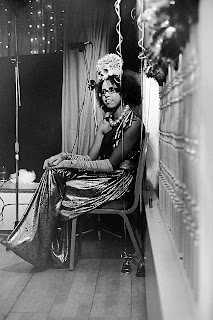 Plus here’s some pictures taken by a fan at the Bizarre Bazaar Ball in Ashburton last month. David Craddock shot these as I performed at this very salubrious event put on by the crazy traders of the town.

Finally, have been laying down the first few guide tracks for my forthcoming album (title to be decided upon) and am working with Vince Lee and Tim Langsford. Listen out!