I have seen the future. And it’s
happened already.
I’ve just watched Miles Electric– A different kind of blue, which is a cracking film about Miles Davis,
centring on the other-wordly sounds he and his fellow musicians made from about
5pm to 5.38pm in front of half a million people at the Isle of Wight Festival on
29th August 1970.
Santana summed it up by saying
that it was a “triumph” for Miles to “convert some of the people to
multi-dimensional consciousness”. Not just any old gig then for this afronaut. 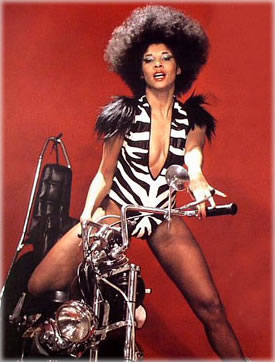 The film also mentioned Miles’
missus Betty (one of Mama’s fave funkettes, on account of her filthy eponymous album), and how she changed her hubby’s look – and maybe his musical direction.
Ah, the power behind the throne.
Talking of relations, I borrowed
a PA off Noel Harrison, son of Rex, in order to do my gig in the low-ceilinged
Cott Inn on Sunday. I woulda used my brand new Bose totem pole thingy but it’s
just too tall.
Note to future self: avoid gigs in short venues. Especially if you want to be multi-dimensional.