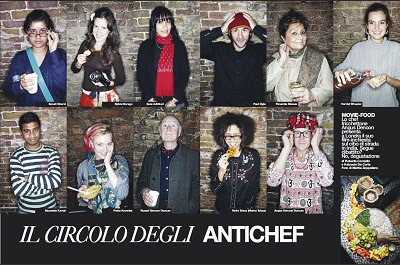 Mama Tokus has featured in the international press!

After attending her mate’s Indian food event, she got snapped by the paparazzi – literally.
Famous Italian national newspaper Il Repubblica sent a reporting team to document Mongo Denoon and the OK Catering Success, which was running an Indian food and movie event in the Whirled Cinema in Brixton.
The idea was that you paid a ticket, scoffed all-you-could-scoff pucka Indian street food, and caught an amazing film on Kolkata street cuisine at the same time.
The reporters did a feature on this great event, and it got published in their glossy magazine – available online here (see page 154 and onward).
Talking of good ideas, I was inspired by a quote from artist John Petts, who is mentioned in an uplifting tale of the small man doing something big, right here.

Petts said:  “An idea doesn’t exist unless you do something about it. Thought has no real living meaning unless it’s followed by action of some kind.”

So here’s some action of a Mama kind: I’ve been working hard on my debut album, with collaborator Vince Lee at the heart of the goings-on (it’s not like he ain’t busy himself. He’s producing Becca Langsford’s debut album Big Surprise simultaneously).

Fingers crossed it’s out in time for the looming Barbican Jazz and Blues Festival, where Mama has a gig on Friday April 29. Buy tickets for that show – and the other Festival shows – online here.

And the title for this cheeky example of 21st century women’s blues and R&B?
On the Ragtime…